The Bariatric Patient’s Marconutrient Breakdown on the Keto Diet

Macronutrients (“macros” for short) are the components of food that we consume in large quantities that provide energy in the form of calories—fat, protein, and carbohydrates. Macros provide the bulk of our body’s energy, and all of the food we consume contains some relative percent of each.

We often express dietary macros in terms of what percentage of total caloric consumption they provide. For example, for someone eating a 1,000 calorie/day diet containing 40g of protein (160 calories), this would mean that 8% of their daily intake is coming from protein.

To alter the Keto Diet to be more bariatric friendly though, you would need to change your ratios to consume more protein. If your caloric intake was 1,000 calories a day, your macro breakdown would be somewhere around 13g carbs (5%), 75g protein (30%) and 72g fats (65%). 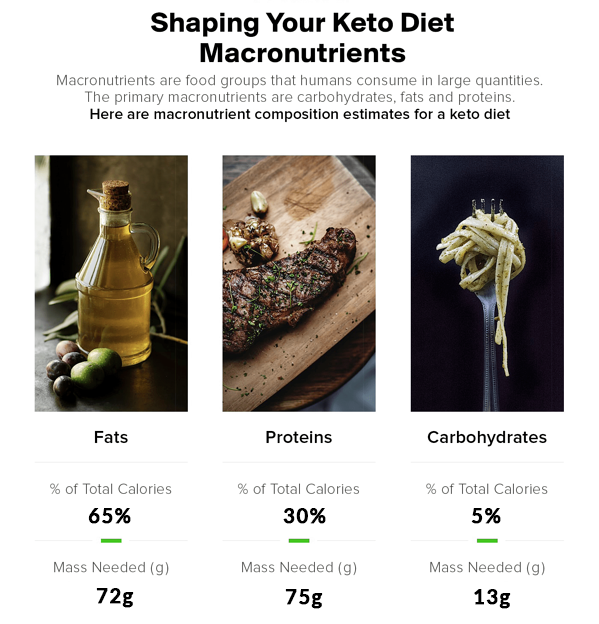 Fats have several physiological functions, including aiding in the formation of cell membranes and comprising other structural and functional components of our body. Our brain is nearly 60% fat—indicating that rather than a nutrient to be feared, fat is something to be embraced.

Contrary to long-held belief, fat consumed in food DOES NOT equal the fat molecules in our body. Our body fat, known as adipose tissue, is the storage form of fat found in lipid droplets inside fat cells known as adipocytes.

Fatty acids (FAs) are molecules composed of chains of carbon atoms of varying lengths. Triglycerides are fats that come from the food we eat, and are composed of three fatty acids and a glycerol molecule (“tri” meaning “three” and “glyceride” indicating a glycerol backbone to which the fatty acids are bonded).

On a ketogenic diet, fat becomes the main substrate for energy production. This is because ketone bodies are produced in the liver following the breakdown and release of fat molecules and fatty acids into the circulation.

Once carbohydrates are restricted, low insulin serves as a trigger for the breakdown of fatty acids from our internal stores (lipolysis). Once released into the circulation, fatty acids can travel into the liver, where they are then used to produce ketones (ketogenesis) by the liver mitochondria.19

This process requires sufficient fat be provided via the diet to provide substrates for ketone production. Aiming to get a majority of your calorie intake from high-quality sources of animal and plant fat becomes a focus of the keto diet. 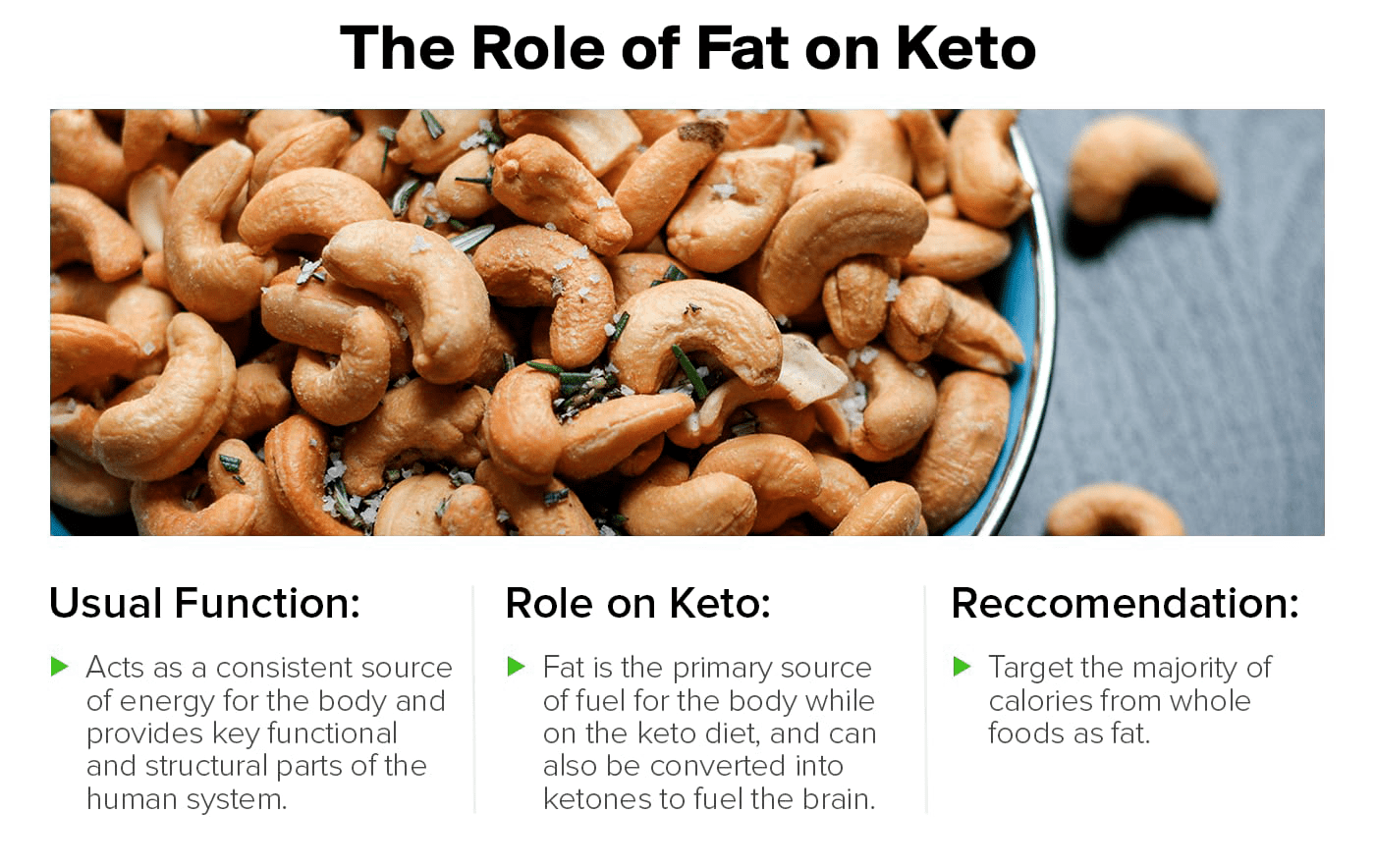 Protein is vital for life, required for building structural and functional components of cells. In contrast to carbohydrates and fat, protein in its natural form is rarely used as an energy substrate by the body. Unless it’s absolutely necessary, our body prefers not to touch proteins for energy.

While fat is prioritized on keto, protein still plays a supporting role.

For one, amino acids can be used in a crucial process known as gluconeogenesis, where they are used to produce glucose. Why is this necessary? Well, when no carbs are consumed, the body still needs some way to give the small amount of glucose needed to provide energy for organs that can’t use ketones or fat as a fuel. On a low carb diet, a process occurs that takes the breakdown products of protein and creates glucose from them. Having enough dietary protein to meet this need is critical.

In addition, consuming enough protein on keto helps to maintain (and perhaps increase) muscle mass—if that’s your goal. Sufficient protein intake (30%) will likely allow you to maintain muscle mass while on a ketogenic diet and continue to lose weight after your bariatric procedure.

One reason for this more moderate recommendation is that for some people, too much protein can increase gluconeogenesis (a process in which the body manufactures glucose from non-carbohydrate sources [protein and fat]) to such an extent that blood glucose rises enough to kick the body out of ketosis. 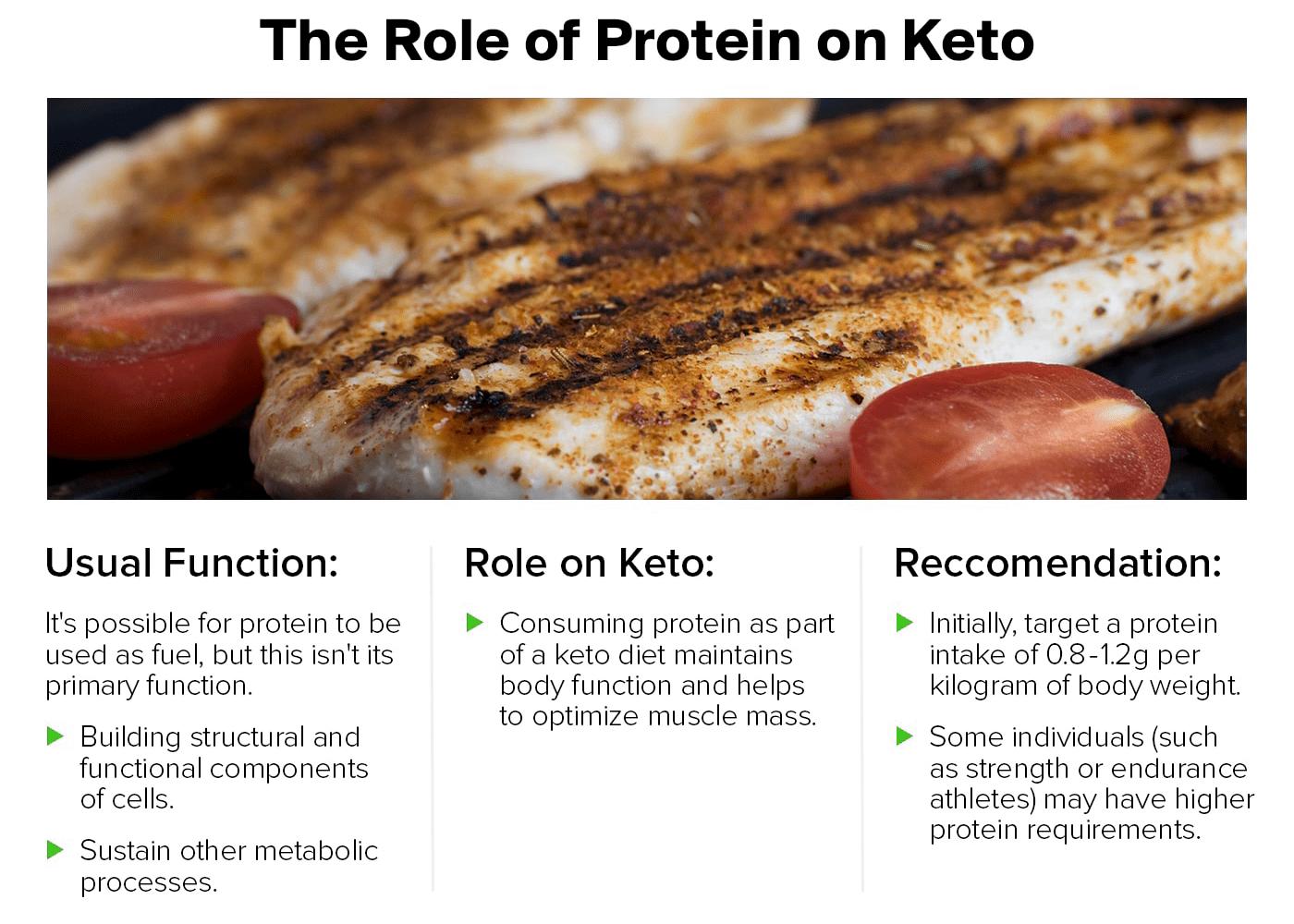 The word “carbs” now comes with a stigma attached to it, but contrary to popular belief, carbohydrates aren’t “toxic” per se. In fact, carbohydrates serve as one of the body’s preferred sources of energy, particularly for high-intensity activity.

Glucose (what carbs eventually get broken down into) has many functions in the body—it’s an energy source for the brain and red blood cells and helps replenish muscle glycogen in the muscle and liver after exercise.

We also have to maintain a certain amount of blood glucose just to stay alive and functioning. But this doesn’t mean that dietary glucose is necessary.

As it turns out, our body can manufacture glucose from non-carbohydrate sources (protein and fat) through a process known as gluconeogenesis (GNG). Even in the presence of low glucose and glycogen (like during a ketogenic diet) our body finds a way to produce the glucose necessary for vital functions.

The Dietary Guidelines for Americans recommends that individuals consume 130g carbohydrates per day, which equates to about 45 to 60% of calories coming from carbs. This is drastically different from a ketogenic diet (especially for bariatric patients), in which 5% to 10% or less of total calories come from carbohydrates. So why do carbs inhibit ketone production? Because insulin levels in the body halt the liver from producing ketones. What raises insulin levels? Dietary carbohydrate.

Carbs on keto have a few considerations, like net carbs and the glycemic index (GI) of the carbs you eat.

“Net carbs” is the total amount of carbs contained in a food minus the grams of fiber. This is proposed to be a better metric of how many carbohydrates are actually absorbed by the body for any particular food.

The glycemic index (GI) of a food is a scale designed to indicate how quickly and to what extent a particular food raises blood glucose after it’s consumed. The scale goes from 1 – 100; for reference, white bread is pure glucose and has a GI of 100. Therefore, low-GI foods might have little effect on blood glucose.

These concepts both indicate why some cruciferous vegetables and leafy greens are okay when it comes to the ketogenic diet. With a generally low carbohydrate composition, low GI, and high fiber content, they’re nutritious additions to a well-formulated KD. 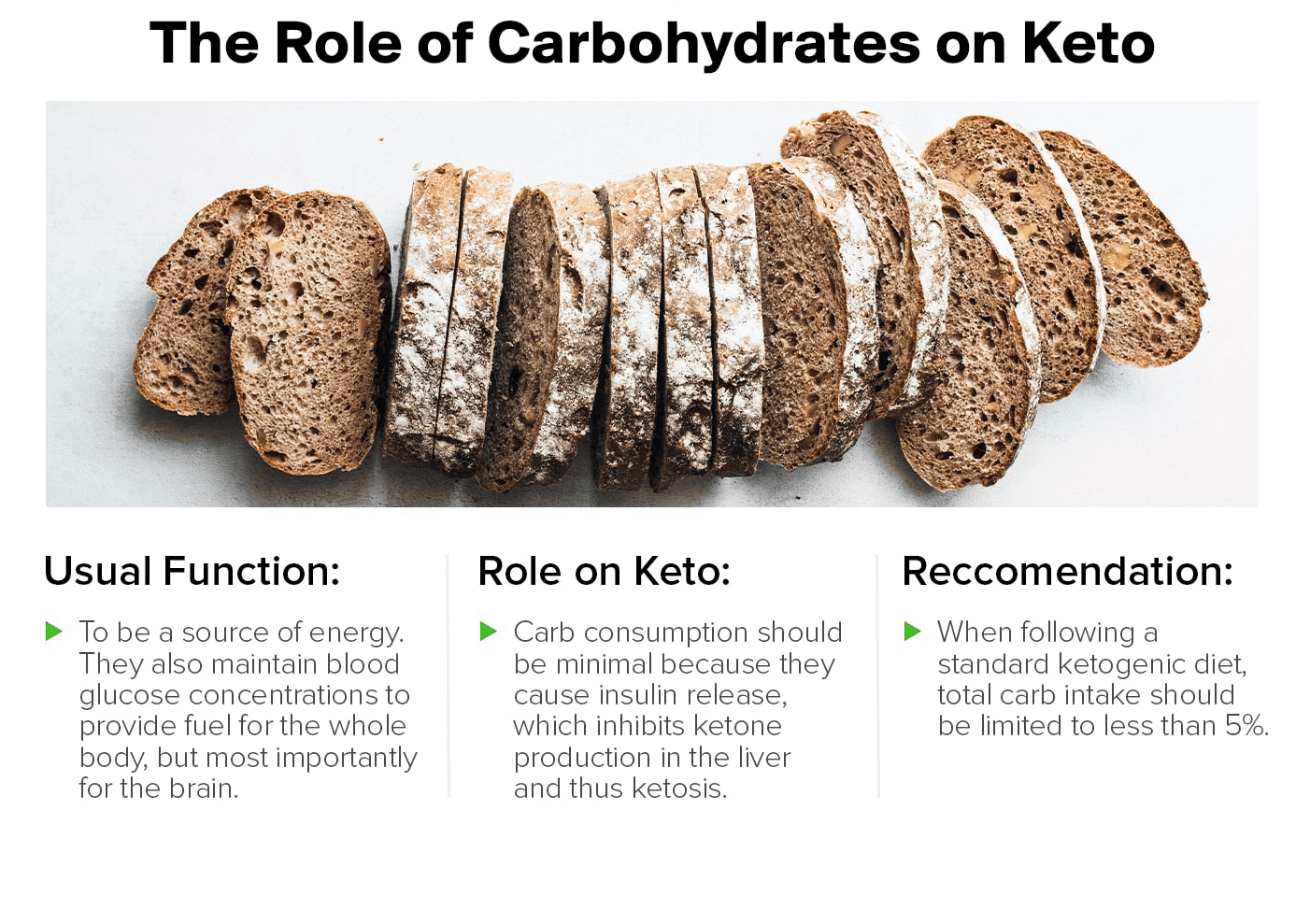 While macros are the focus on keto, this doesn’t mean micronutrients should be kicked to the curb.

In fact, micronutrients may be a crucial consideration on keto, given that, at least initially, this diet can throw off the body’s balance of several key minerals which help with vital physiological processes and are necessary for optimal health and wellness.

Why worry about micronutrients? Well, cutting out carbs on a ketogenic diet can lead to the elimination of many foods that are rich in micronutrients—primarily fruits, veggies, and fortified grains.

Additionally, carbohydrate restriction has a diuretic effect, increasing urine production and a “shedding” of body water. But water isn’t the only thing lost in this process—minerals and other micronutrients are excreted as well. This process is most potent in the first few weeks of a ketogenic diet, after which things may start to balance out.

The primary micronutrients to be aware of are sodium, potassium, magnesium, and calcium.

These are known as electrolytes, and they play roles in things like maintaining blood volume, cell membrane potentials, muscle contraction, and proper function of the heart. Deficiencies in these minerals are associated with numerous health issues.

Sodium loss may occur on a ketogenic diet since under conditions of low insulin, the kidneys absorb less sodium and excrete more into the urine.

For this reason, adding more salt to your ketogenic diet might be a good idea, especially if you’re feeling symptoms like dizziness, fatigue, or muscle cramps or spasms.

An important note: salt and sodium are NOT the same thing. Salt actually contains about 40% sodium, with chloride making up the remaining 60%. That said, while you might increase your salt intake to 6g (6,000mg) per day, this only amounts to 2.4g of sodium.

Adding salt to your diet in the form of bone broth, bouillon, or just shaking some onto meats and vegetables is a great way to up your intake.

For individuals with high blood pressure who may also be salt-sensitive, consult a doctor before increasing sodium intake.

Potassium is necessary for proper muscle contraction and blood pressure regulation, among other functions. It has been shown that on a low carbohydrate diet, potassium excretion increases for the first 14 days, but eventually returns to normal levels.

The recommended intake for potassium on a ketogenic diet is around 3g to 5g per day. Prioritizing keto-friendly potassium-rich foods is a must. Some of these include: beans and peas, avocados, and green and root vegetables.

These two minerals might not necessarily fall drastically on a ketogenic diet, but are nonetheless important to maintain health and function.

In particular, magnesium deficiencies are now being proposed as one reason for the increased prevalence of cardiovascular disease in the U.S and around the world. This comes as no surprise, since magnesium plays a role in nerve, muscle, and immune function.

Around 500mg of magnesium per day is recommended for individuals on a ketogenic diet. To achieve this, consumption of magnesium rich foods such as broccoli, leafy greens, and tofu may be recommended; however, magnesium supplementation may be warranted.

Calcium is known to promote “strong bones and teeth” but is much more complex than just that. Calcium is needed for blood clotting, cell signal transmission, and blood pressure regulation.

Luckily, many keto-friendly foods are high in calcium—full fat dairy, canned fish, mushrooms, and dark leafy greens top the list. Aim to get about 1g to 2g of calcium per day.

Being aware of what happens to micronutrient levels on a ketogenic diet can allow you to take precautions. Prioritizing micronutrient-rich, keto-friendly foods and perhaps using a mineral supplement are two ways to prevent micronutrient deficiencies.

Obviously, attaining your nutrients through whole-food sources is ideal, but sometimes diet isn’t enough, and supplementation can become beneficial.

Diets, Food & Nutrition
Previous The Fundamentals of a Keto Diet
Next Deciding if the Keto Diet is Right for You After Bariatric Surgery Fad Diets: The Dangerous Side Effects How Many Carbs Are In That? Thanksgiving Edition Protein After Bariatric Surgery: Everything You Need to Know