The Fundamentals of a Keto Diet

Far from a fad diet, the ketogenic diet, a.k.a the keto diet, is proving that it is here to stay. The attention is well justified, since the ketogenic diet has benefits for athletes, weight loss, and several other health-related conditions. And with an emphasis on the consumption of whole, nutritious, tasty foods, many people find the diet to be fairly non-restrictive. In fact, some claim they’ve never eaten better. They don’t even miss the carbs, which were once a staple of their low-fat diet.

But, the keto diet is more than just chugging buttered coffee and blending MCT oil into your post-workout smoothie. If you’re thinking about starting a ketogenic diet anytime soon, there are many things to understand about how the diet plan works (and why it’s so effective). Let’s take a deep dive into the keto diet and how it works.

The What and Why of Ketosis

Ketosis is a physiological state defined by the presence of ketone bodies in the blood. Ketone bodies can be thought of as an energy source for the body, just like carbohydrates and fat.

Many tissues in our body can use ketones. You might be thinking, “what’s the use of ketones, if we can just use carbohydrates and fat?”

Ketones are often thought of as an “alternate” energy pathway; the human body evolved to create ketones in order to survive during times of low energy availability.

For example, when carbohydrates in the form of glucose and glycogen (the stored form of glucose) are depleted, a cascade of signals is initiated in the liver that ultimately results in the production of ketone bodies from fatty acids. There are three main ketone bodies: acetoacetate (AcAc), beta-hydroxy-butyrate (BHB), and acetone.

In times of real starvation or starvation-mimicking conditions (like prolonged fasting or very low carbohydrate diets), ketones become a fuel source for the brain and skeletal muscle since blood sugar is low.

This may allow sustained performance and function. Thanks to our prodigious amount of stored fat, our ability to tap into this source of energy is nearly limitless. The ability to enter into ketosis is in everyone, we just have to allow the body to achieve it.

One important side note. Be careful not to confuse physiological ketosis with ketoacidosis, which is actually a pathological condition sometimes encountered in people with diabetes.

Ketosis is where the “keto” in “ketogenic diet” comes from.

Ketogenic diets are designed to produce a state of ketosis—this comes from consuming high amounts of fats (from which ketones can be produced) along with restricting carbohydrates to <50g/day.

The ketone bodies (AcAc and BHB), which are produced in response to a ketogenic diet, are shown to have beneficial signaling properties throughout the body; these benefits include enhanced longevity, improved healthspan, and treatment of neurological disorders and obesity.

It seems pertinent to find ways to induce ketosis and stay in this metabolic state as long as possible. Diet might be the best way. However, as we will see, you don’t have to be “ketogenic” (producing your own ketones) to be in ketosis.

HVMN, a supplement company that sells products to support the Keto diet, has many products to assist in the rise of ketones in the blood to aid in weight loss. 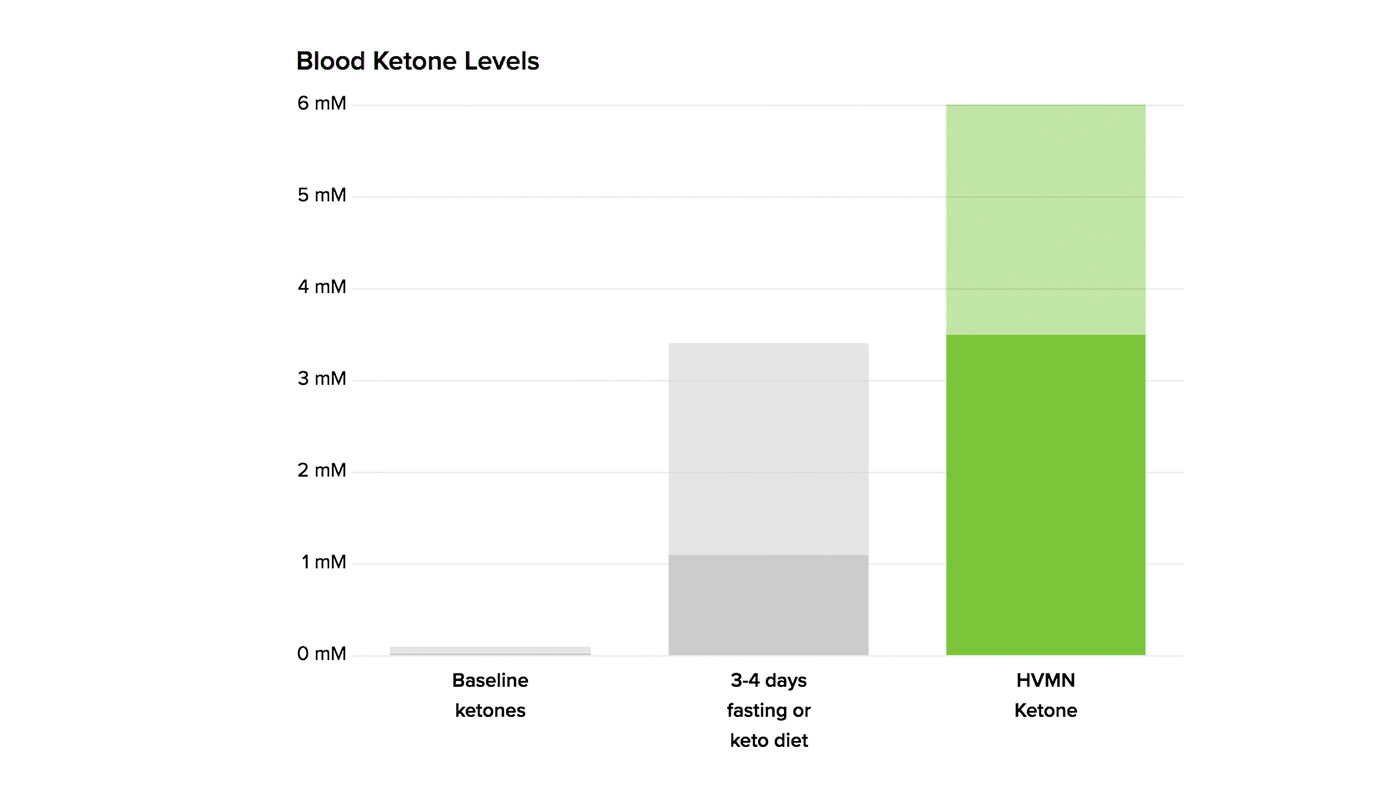 How to Achieve Ketosis

A generally accepted “threshold” for ketosis is a blood level of BHB above 0.5 millimolar (mM). From there, increasing levels of blood ketones correspond to various “levels” of ketosis. For instance, 0.5 – 1.5mM is “low” ketosis, 1.5 – 3.0mM is considered “moderate” ketosis, and over 3mM is considered “high” ketosis. Anything below 0.5mM and you aren’t in ketosis at all, technically speaking.

You can test if you are in ketosis by taking a blood test, urine testing or by using a breath ketone meter.

Traditionally, physiological ketosis is achieved through fasting or carbohydrate deprivation. After a long enough time, blood glucose starts to drop, glycogen stores become depleted, and the body begins to find other routes of energy production. Ketosis is one of these routes.

But diet isn’t the only way to achieve ketosis.

As an alternative to achieving ketosis through fasting or a ketogenic diet, exogenous ketone supplements can be used to induce ketosis.

While supplements induce more short-term ketosis and thus may provide improved mental clarity and athletic performance, exogenous ketone supplements may not grant the same health benefits achieved through diet and/or fasting, since your body won’t be burning its own fat.

Intermittent fasting (IF) is a popular practice, with iterations of IF including narrowing the eating window of the day, alternate day fasts, water-only fasts, and prolonged 3 – 5 day fasts.

While many people fast for reasons such as a “gut reset” or to strengthen will power, one of the main benefits of fasting is that it is a potent inducer of ketosis, and it’s also great for weight loss.

Longer fasting periods lead to higher ketone levels, up until a maximum of about 8mM – 10mM.

The ability to enter ketosis through fasting, however, will also depend on other factors like how much you exercise and how long your fast is. Furthermore, when paired with dietary strategies, ketosis might be achieved sooner with higher ketone levels.

The final way to induce ketosis is through dietary carbohydrate restriction, a.k.a a very low-carbohydrate ketogenic diet (VLCKD) also known as a ketogenic diet (KD). While similar to the Atkins diet, keto is a bit different. The Atkins eating plan advocates high protein consumption, while keto recommends a more moderate protein intake.

Other misconceptions about keto are that it’s “just another low-carb diet” or that keto is paleo. Neither of these statements is correct.

Ketogenic diets involve dietary carbohydrate restriction paired with an increased consumption of dietary fat, with the remaining dietary energy coming from a moderate intake of protein. The high-fat consumption provides substrate for ketone body production by the liver, and the elimination of high-carb foods helps eliminate readily available glucose in the body, which provides the signals necessary to put the body in a ketogenic state.

In contrast to exogenous ketone supplements or intermittent fasting, a ketogenic diet might be an ideal long-term lifestyle strategy. Many find that implementing this diet is relatively simple after some time, and even find it enjoyable—doesn’t sound like a “diet” in the traditional sense of the word, does it? 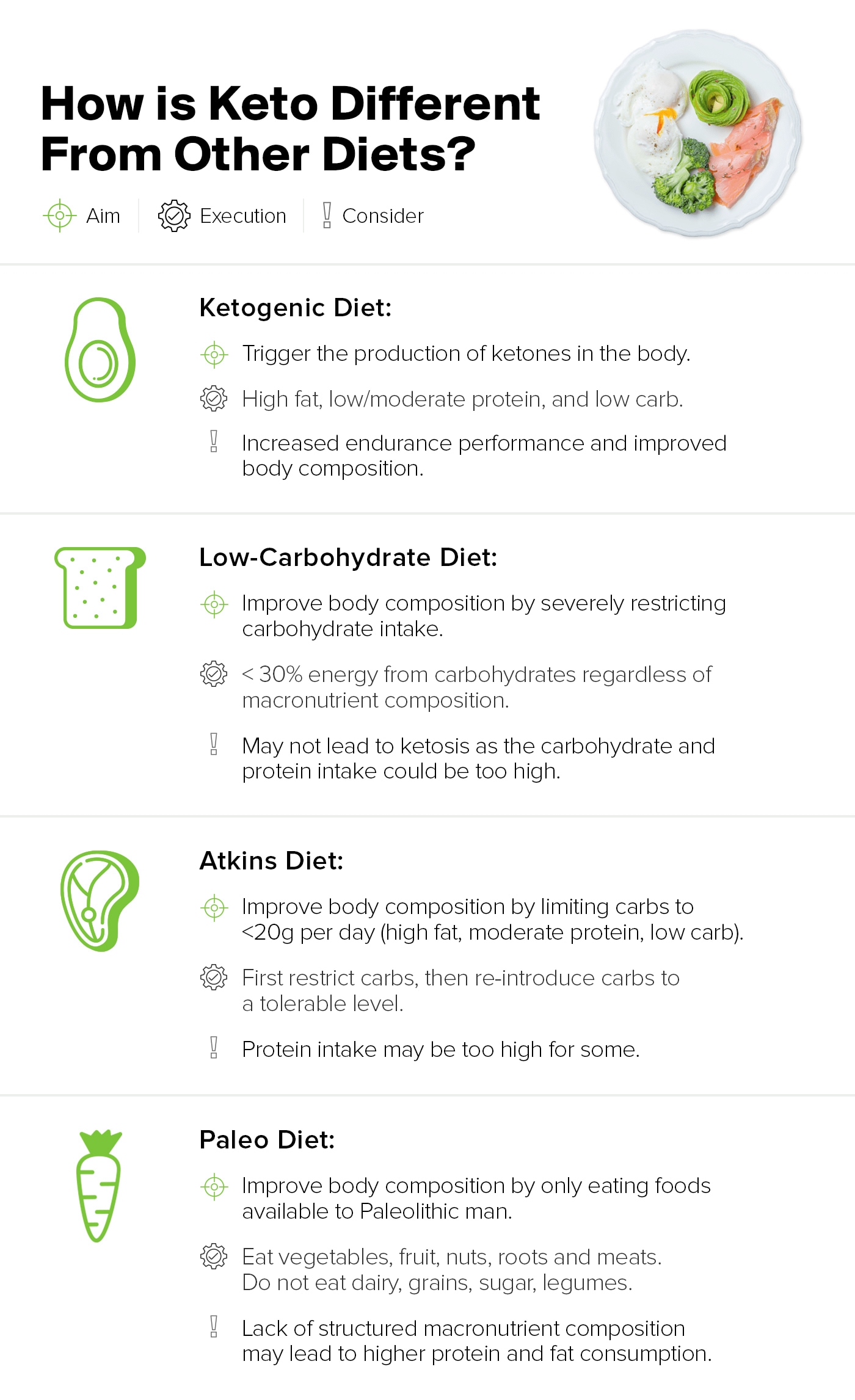 The Post-Op Diet: All You Need to Know Tips to Stay Healthy When Working From Home